You heard wrong... there is NO Toyota lift that will work for the Mazda.
You can't find suspension lifts because they don't exist. I looked everywhere and made two dozen phone calls to various vendors and dealers. Noone even HEARD of a lift for the Mazda.
I'll tell you why, I tried to design my own lift very briefly and here's the troubles I ran into...
I made a 3" front diff drop, the twisted the torsion bars up about 4-5". At that point, my first problem was the half-shafts became about an inch or so too long due to the control arms pulling the spindles towards the frame from the lift. So, I figured I'd pull the shafts, run the truck with the lift until I could shorten those or lengthen an extra set of control arms. Problem number two was that is started busting upper control bolts, where it bolts to the frame. The control arms were at such an angle that when you hit a bump, they didn't want to sweep up like a stock arm. The suspension was smashing the STRAIGHT up, shearing off bolts. I drilled out the weak stock 12x1.75 stock bolt holes (at $12 ea I was tired of replacing them) and put in 14x2.00 12.5 SS bolts and nuts (at ~$5 a bolt/nut) with lock washers.
At first, that was a bandaid to the real problem. I was then worried about damaging something important, not to mention the lack of 4x4 and winter was coming. 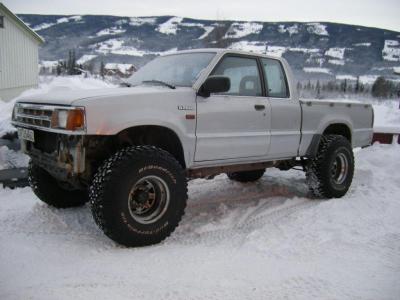 ja
Back to Diverse Merker